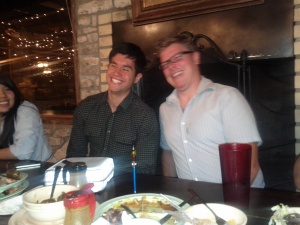 Last Lord’s day we went to a going away dinner for my friend, Joseph Newman. When the waiter brought us bread to eat Joseph looked at me and asked for some wine. What he was really asking for was something to nourish him spiritually. I shared with him about the first supper.

Many people are familiar with the last supper. This is recorded in Matthew 26, Mark 14, and Luke 22.  The day before Jesus went to be crucified, He broke bread with His disciples and drank wine. He said it symbolized His body being broken and His blood being poured out for many for the forgiveness of sins. Then He says, “Do this in remembrance of Me.”

Every week, this is what we do on the Lord’s day. We eat unleavened bread and drink wine. This has been a very special time for me to remember the Lord and all He’s done. He’s given Himself for us. What a supply of joy and peace when we give ourselves back to Him!

Last Lord’s day, a brother uplifted my view of the Lord’s supper. He shared about the first supper. The first mention of bread and wine being served is in Genesis chapter 14. Abraham was in a fierce battle in an attempt to free his nephew Lot from captivity. The problem was that he had to fight against 4 kings to get him back. These kings had cities full of  soldiers compared to Abraham’s 318 men. So how did they pull out the win?

While Abraham and his men were fighting, there was someone interceding for them. This was Melchizedek, a type of Christ as the kingly priest. How else could Abraham have defeated so many armies? What a victory!

Not only did Melchizedek pray for Abraham, he came out to meet him and brought out bread and wine to supply him. This was also to celebrate God’s victory!

Christ’s death on the cross is a victory! Jesus Christ conquered satan! We were all slaves but Christ has set us free! This is why we come together to be supplied and to praise Him for His victory. This is what will bring Jesus out to meet us.

I was having a not so victorious day this week then I get a call from my friend Gustavo. He is shouting Hallelujah! Praise the Lord! Again, I didn’t feel victorious but that doesn’t matter. The victory is won! Praise the Lord for that! I joined in the praise. At the end of our talk, Gustavo encouraged me to preach the Lord’s victory. So here it is. I would like to encourage you to preach Jesus Christ’s victory too 🙂

Howdy, my name is David and I love Jesus. I have fallen in love with the Bible and love reading Christian books and sharing the good news.
View all posts by drod55 →
This entry was posted in Uncategorized. Bookmark the permalink.

2 Responses to The First Supper